Umpiring Accreditations & What It All Means

By emmaOctober 2, 2018News
No Comments

We are super proud of our KW Wolves who don the fluros each week, and we have some VERY talented umpires in our wolf pack, many who are badged and some who earned these badges this year! We call them out to say CONGRATULATIONS because it’s well-earned praise for their efforts, but do you know what the badging process entails? These wolves have gone to a mighty effort, so read on to understand what Umpiring Accreditations mean and what we’re howling about when we acknowledge our umpiring wolves! Special thank you to Mel Blanchard for writing this piece for us.

You wouldn’t have a game without them, and often, it is just as competitive in the umpiring world as it is in the playing world.

This year many of our wolves were awarded a high level badge across many State and National Tournaments. But do you know what this really means? Within Hockey Australia, umpires can be awarded Community, Level One, Level Two and Australian Badges. Within Hockey Queensland, Community Advanced, Level One Advanced and Level Two Advanced Badges can be awarded for ongoing progression. These badges are awarded by a competent Assessor within the association or tournament depending on the standard of games an umpire is on.

So how does it work? Well the first step is to be assessed for a Community Badge. There is no age or division limit for this, in fact, we have many juniors including Lauren Seawright, Alana Tweddell and Katie Le Moeligou who have all recently obtained their Community Badge. We also have many Senior Grass players who also have this level badge including Tracey Sullivan, Christine Blanchard, Riley Kirk and Michelle Weekes. Michelle obtained her badge this year! Riley also received Most Valuable Senior Women’s Grass Umpire awarded within the BWHA competition this year. Great work Riley.

As you may have seen on recent Social Media posts, Georgia Gaddes was awarded her Level One Badge at U15 State Championships. The Level 1 Umpire Training Program is designed to train umpires in the fundamental concepts of umpiring including fitness, positioning, signals and ensuring the safety and enjoyment of players. These requirements are tested in both an online written test, and a practical test.

Earlier in the year, Mel Blanchard was awarded her Level One Advanced Badge at Masters State Championships and Abby Heffernan was awarded her Level One Advanced Badge at the Under 18 State Championships. This badge is recognised and awarded at a Hockey Queensland level. Abby was also awarded Most Promising Umpire at the tournament and Most Valuable Umpire within Kedron Wavell Services Hockey Club for 2018. Mel was also awarded Most Promising Senior Women’s Turf Umpire within the BWHA competition for 2018. Other members of the club also obtain this badge including Nikki Taylor & Claire Butcher. To be assessed for this level badge, the umpire must hold a current Level One badge and umpire an appropriate high level standard game.

Within our Wolf Pack, we also have an Australian Badge holder. Alyson Aleksic was awarded her Australian Badge in 1997 at U21 National Championships in Sydney. This is a tremendous effort and Alyson continues to umpire Division 1 games in Brisbane every week. Alyson also leads our Umpire Mentor Program within Kedron and has developed many of the umpires listed above over many years.

There are many streams to progress as an umpire. These can include State Championships for preparation and continual growth and as you work further up the ranks, obtaining a position on a National Panel is ideal. Within a State Championship Umpire Panel, Hockey Queensland can put forward names to Hockey Australia to be invited to attend a National Championship. Once on a National Panel, performance at the tournament is key. To move up in age groups an umpire has to be Promoted from their current level based off the final assessment at the end of the tournament.

Below is a table of the Accreditation Levels, Assessment Criteria & Assessor Level Required, as well as a flow chart for a simplified view of how the levels of umpiring works.

Want to join our umpiring ranks and earn your badges too?! We’d love to hear from you so please get in touch with our Club Secretary via email. 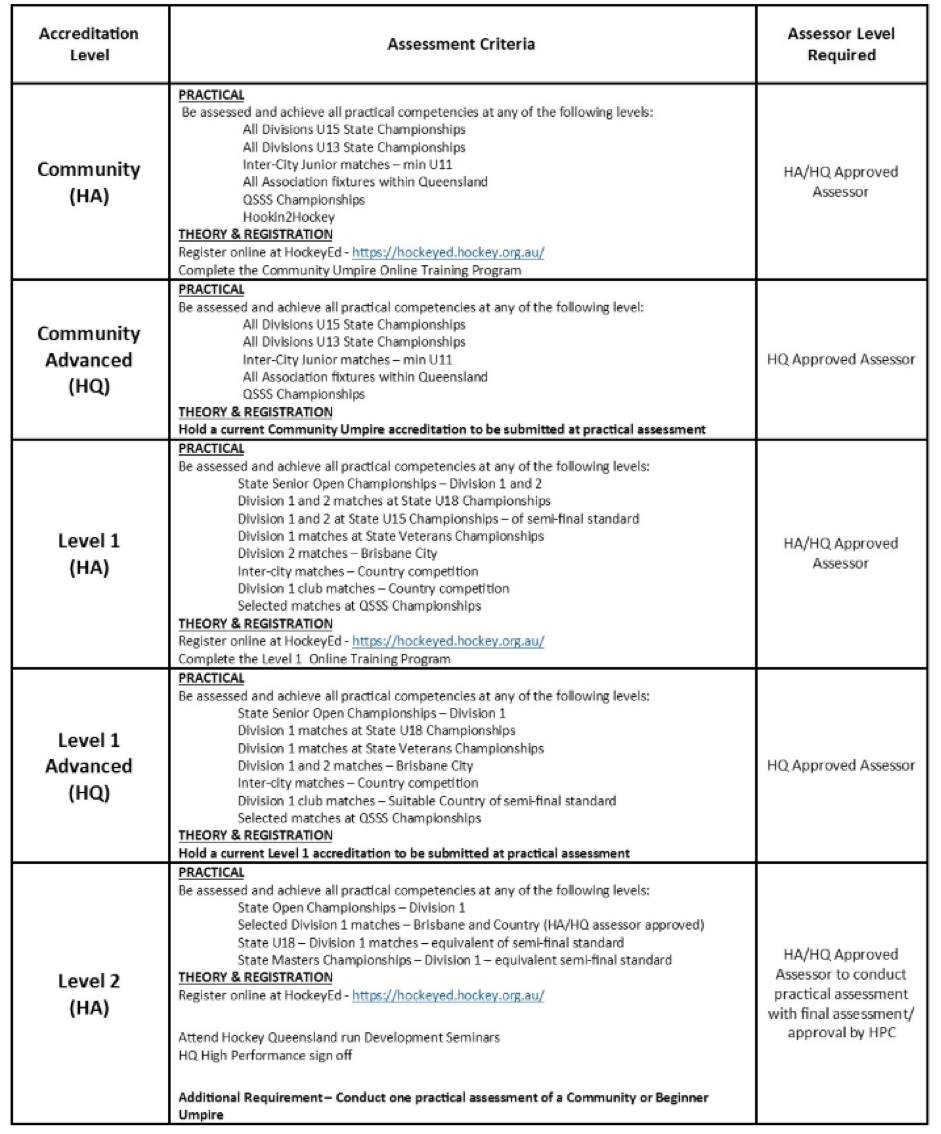