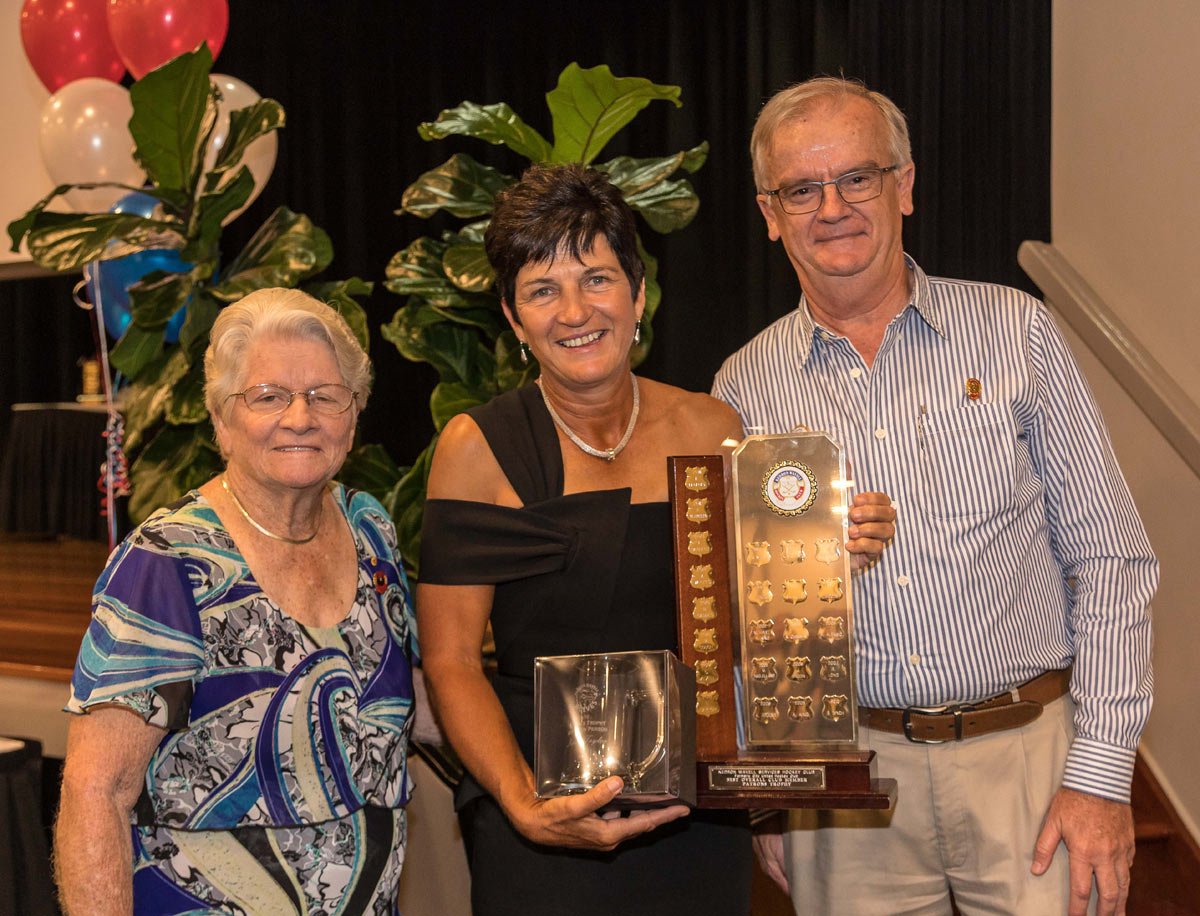 On Saturday 22 September 2018, it was our Senior Presentation Night – a night of fun where the Wolves celebrate in style in our den, a.k.a, Kedron Wavell Services Club.

Our MC’s for the night were 2018 Club Captains, Toby Hamilton and Amanda Paech and they did a mighty fine job of keeping the festivities running on time and ensuring everyone had a great night. We heard the Ladies season in review in rhyme thanks to Ladies VP, Tracey Sullivan and Mens VP Alan Myers prepared a Presentation for the occasion to give us insight into the Men’s 2018 season. Special thanks to Andrew Blanchard of Hockey Photos Brisbane for preparing the night’s photo slide show, and for the very heartfelt acknowledgement of a beloved wolf, Holly Butcher who passed away from Ewing Sarcoma (a form of cancer) earlier this year. <3

We all enjoyed a night celebrating our 2018 season, and congratulate each and every one of our award recipients!

The Club views its perpetual trophies as high honours. To have your name engraved on one of these is special and an achievement to be very proud of.

With this award we recognise one of our most quiet achievers. Joining our club only three seasons ago, her move to Brisbane was well and truly Kedron Wavell’s gain. Gaining a new player at sign on, who says they are an umpire is always a bonus. This year she earned her Level 1 Advanced badge adding to her long list of accolades includes Australian Junior Championships, grand finals and Commonwealth Games warm-up matches. All this and she still has time to mentor up and coming BWHA umpires. Congratulations to our 2018 Senior Ladies Umpiring Trophy recipient, Abby Heffernan.

Our winner this year is no stranger to umpiring awards having been a recipient previously in 2012 and 2015. In 2018 he could regularly be found out and about on a Friday night or Saturday morning officiating Junior Matches and on a Tuesday Night at Masters matches. He umpired an u13 grand final and only missed out on a masters grand final appointment because of the number of Wolves teams competing. Congratulations to our 2018 Senior Mens Umpiring Trophy recipient, Matthew Weekes.

This award recognise those players within ladies and men’s competition who are dedicated to the club and the sport of hockey.

This Player must meet certain criteria including; being registered in the top grade in Brisbane, having a high percentage of attendance at games, skills and fitness training. This Player must be heavily involved in Club activities and demonstrate the qualities of dedication and commitment.

First arriving at Kedron Wavell in 1996, this player is an integral part of not just our senior women’s sides but also our club. Playing across both the senior turf and masters competition, she offers agile and competent defence. Her commitment to continuously improving her own game, always ensuring that she is supporting her team and the club, is something to be admired. She might be little by name but her contribution is far from that. Congratulations to our Most Valuable Senior Ladies Player, Amanda Paech.

This Player must meet certain criteria including; being registered in the highest club division in the BWHA Downey Park competition, having a high percentage of attendance at games, skills and fitness training. It is designed to recognise the player who is dedicated to the sport and committed to the club.

First joining our club in 1995, this player has recently returned to the fold. In her first year back “on the grass” she has quickly proven herself to be an integral part of the team, chosen as captain by her teammates. She leads by example, both at training and on the field. She is a tough competitor who never ever, ever gives up.  Congratulations to our 2018 Most Valuable Ladies Player (Downey Park), Fiona Taylor.

The most valuable Men’s player is awarded to a player in the highest club division in the Brisbane Hockey Association. They must have had a high attendance and involvement at training, fitness and skill training and a high percentage of participation in fixture games. It is designed to recognise the player who is dedicated to the sport and committed to the club.

This award is made to the men’s player who was considered by then our coach to have made the greatest contribution to the first-grade side in 2018. This young man could be considered the quiet achiever of our squad. He is determined and has energiser bunny enthusiasm levels, Not to mention the fact that his ball skills and pace are outstanding. In 2018 he had a stunning season for the Wolves and for his other weekend club in Ipswich. His season was capped by a sensational performance in SuperLeague for Ipswich which culminated in a breakthrough into the Blades Squad. Congratulations to the most valuable senior men’s player for 2018, Nathan Smith.

20 years of service to our club is a significant achievement. These five players have a laundry list of on-field accolades between them, three of them Masters representative players. Through the presentation of these awards we recognise their commitment and dedication to our club.

2017 saw the introduction of the Grey Wolf Trophy, for the best Masters Clubperson. This trophy was donated by Stronach Building and was presented by Barry Stronach.

The Grey Wolf is designed to recognise a player in the Masters competition who is dedicated to the sport and committed to the club. This player displays the attitudes being fair-minded and promotes the Club’s masters competition in the best light. This person must have a high percentage of participation in fixture games.

This man does it all, he is a leader on and off the field as a player and coordinator within our incredibly successful masters teams. He has represented Queensland at over 40, over 45 and over 50 levels and has won club premierships in divisional and masters hockey on a regular basis.  Congratulations to our 2018 Grey Wolf, David Wilson.

This trophy is presented to a player who has been a good ambassador for the club. It can be won by performance on the field whether playing, umpiring, coaching or can be for actions in club administration, fundraising, extra to normal requirements, or any other actions which benefit the club or the reputation of the club as a whole.

There is no doubt that each and every person in this room has noticed the impact tonight’s recipient has made for our club. First joining the club in 2012, she is known to be a crafty goal scorer on the field. But it is her contribution to the wolfpack spirit and profile for which she is recognised tonight. By tapping into her “day job” skills she has over the course of the last two years put Kedron Wavell on the social media map. I have heard that at over 1,500 followers we currently have the most popular hockey Instagram account in Brisbane. Congratulations to this year’s President’s Trophy recipient, Emma Judd.

Our winner of the Presidents Trophy for 2018 is a current player, leader and mentor and it won’t be all that long before we are adding his name to the Life Members board to sit beside a couple of close relatives. First playing with the Wolves in 1997, he just last year received his 20-year service medal. In those 20 years he has played through the Junior ranks, won best and fairest medals in second grade and reached first grade for several seasons. This year he has on many hats, Player, Coach, Club Captain and host of our Senior Presentation Night. Congratulations to this year’s President’s Trophy recipient, Toby Hamilton.

This trophy is presented to the person judged by the Management Committee to be the BEST CLUB PERSON for the season passed. This person can be a player, supporter, or member who has performed duties far beyond what would be normal. This can be duties for any purpose which was a benefit for the club or the reputation of the club as a whole.

The 2018 Patron’s Trophy recipient is an icon of our club.  First joining our ranks in 2008, her kind, calm, and sensible approach to all that she does has had a tremendous impact on club culture. Her technical skills are respected by players, officials and opponents throughout all the competitions with which she is involved.  In fact, many players have joined the club simply to be coached by her. She is nothing if not determined to see our club flourish into the future. This year she took on a junior coaching role determined to help build future wolves for the top levels of competition. And in turn, helped our JT1 girls side win a 2018 premiership. She has coached our Division 1 team for 11 years and with patience and determination is still focussed on that ever elusive premiership. Congratulations Nikki Taylor, we’re proud that you’re a wolf.

Congratulations to all award recipients! We look forward to welcoming you all back in the 2019 season!